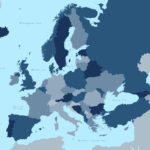 European digital options, aka European binary options, can only be exercised at (or after) expiry. The nomenclature ‘European’ is irrelevant and they can be traded anywhere.

Each of the below can only be exercised at (or after) expiry. In the case of digitals the process of expiry is highly unlikely and any in-the-money will deemed to have won and, accordingly, paid out automatically.

The top two rows of instruments are directional. These instruments enable speculators to speculate or hedge that the underlying price is heading either up or down.

The tunnel, eachway tunnel, tunnel accumulator and tunnel strips primarily enable the speculator to bet that the underlying is, or is not, going to move.

As  has been stated in ‘Digital Options’, on this site if the underlying at expiry is exactly on the strike, settlement will be treated as the arithmetic mean of the two settlement values either side of the strike. Therefore, since the digital call can  settle at 0.0 or 1.0 then if the asset price settles on the strike at expiry the ‘pinned’ settlement value will be (0.0 + 1.0)/2 = 0.5.

Other settlement prices for binaries, or all-or-nothing options, can be treated in other ways.

So if the winning call can settle at 1.00 when the asset price is at-the-money what should the same strike put settle at? Here is the problem since if the put strike is deemed as a winner, like the call, then the call and put together are now worth 2.00. Yet what if the put settles at 0? Then there is a call/put disparity where the put holder is clearly being disadvantaged. Being short a digital call is not the same as being long the same strike digital put.

Some bizarre outfits at the time of binary options mania a few years ago would simply make all bets null-and-void. I guess these ‘brokers’, or more accurately dodgy operators, hadn’t brought their technology ‘A’ game to the table.

Both Method 1 and Method 2 are hopeless alternatives to the proposed method of taking the arithmetic mean of the settlement values either side. Method 1 would be a market-maker’s nightmare. Method 2 would be the commercial directors nightmare.

In the table above are 9 different European digitals. Yet there are many, many more variations of those 9 structures that could be adopted. For example, an eachway call consists of a strip of two digital calls, same expiry, different strikes. But there are a number of different ratios that can be adopted. This also applies to the call accumulator.

American digitals, Knock-In and Knock-Out digitals plus two-asset digitals all have a myriad of variables too. The diverse range of digital options P&L profiles makes a mockery of other forms of options, notable conventional options.

The major achievement of this website will be when regulators recognise that digital options are not some devil-spawned financial instrument but a much better way to speculate on the market than conventional options, CFDs or turbos.